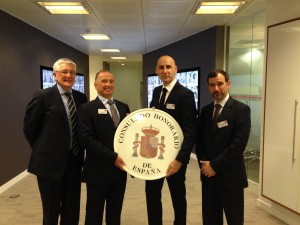 On Wednesday 26th February, the Consul General of Spain in Edinburgh, Mr. Miguel Utray Delgado visited the offices of DWF in Manchester in order to officially inagurate the Honorary Consulate and hand the Spanish flag, shield and seal to Antonio, who has been recently appointed as the Honorary Consul for Spain in Greater Manchester, West Yorkshire and North Yorkshire.

The ceremony took place with 50 guests from different sectors and professions, most of them related to Spain as well as representatives from the Arts, Language Schools and Universities.

Antonio felt very honoured by the pressence of the Consul General and the trust received and stated that he will do his best to assist the Consulate General in Edinburgh and promote the Spanish brand in the North of the UK.

The event proved a success with many guests enjoying the company of the other guests as well as the food, the music and drinks, all with a Spanish touch and flavour.