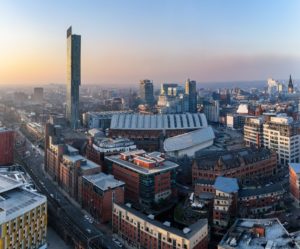 Picture of Manchester where Gunnercooke LLP has one of its offices (together with London and Leeds).

An extract from LegalWeek

Allen & Overy (A&O), Kirkland & Ellis, CMS and Fieldfisher are among eight firms set to battle it out for Law Firm of the Year at the British Legal Awards next month.

The quartet will go head to head with Clyde & Co, Latham & Watkins, Gateley and Osborne Clarke for the coveted award, with the winner to be announced at a ceremony hosted by Legal Week on Thursday 30 November.

A host of law firms and in-house legal departments will compete across team and individual categories including M&A Team of the Year, General Counsel of the Year, London Office of the Year and UK Law Firm of the Year, with the event to be held in Finsbury Square in the heart of the City.

Some of The British Legal Awards 2017 firms shortlisted are :

UK Law Firm of the Year

European Law Firm of the Year

Slaughter and May and Skadden Arps Slate Meagher & Flom will run against a strong line-up of firms including Linklaters and Herbert Smith Freehills for M&A Team of the Year (large deal), while A&O, Clifford Chance (CC) and Sullivan & Cromwell are among those chasing the banking and finance prize.

On the disputes front, Clyde & Co, Freshfields Bruckhaus Deringer and Signature Litigation are among those in contention for Litigation and Dispute Resolution Team of the Year

Meanwhile, the London Office of the Year award will see the likes of White & Case, Morrison & Foerster and Cooley compete with names including Ireland’s Mason Hayes & Curran and Portugal’s Gomez-Acebo & Pombo.

Other private practice prizes will recognise teams including property, restructuring, and private equity, as well as rewarding firms’ efforts in areas such as technology and diversity.

The in-house legal community is also well represented at the awards, with a number of new prizes open to legal teams within corporates. Virgin Media, Avaya, Nokia and Trainline are all in contention for Legal Department of the Year (TMT), while Barclays, TSB and LV are among those running for the equivalent financial services award.

Winners will be selected by an independent judging panel later this month. The panel includes senior business lawyers from major banks and corporates, as well as former private practice leaders.

Best of luck to all the law firms shortlisted.

What is Gunnercooke? Very often I get asked this question by clients and contacts. They have heard that we are a diffent law firm to the standard, traditional and rigid law firms. However they do not know what makes the difference between us and other law firms.

See above an interesting video made by The Telegraph on our law firm Gunnercooke LLP which explains the ethos of the firm. It summarises quite well who we are, what we do and what we are aiming to achieve. You will note that our priority is client service. We believe that by focusing on clients, the rest (the financials, the success, the reputation) will follow eventually.

Interestingly, Gunnercooke LLP celebrated its annual symposium last week in Oxford where around 100 plus lawyers gathered to talk about the trajectory of the firm and listened to excellent speakers who talked about various subjects from business development to client quality service and even how to be happy! It was a good opportunity for lawyers from different departments to talk about what they are doing and the future of the legal profession. 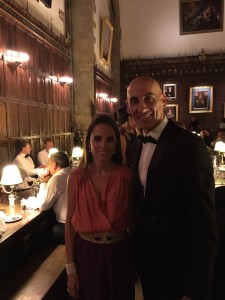 It was also positive for us, the Spanish lawyers at Gunnercooke, to discuss burning subjects of today with other lawyers such as Brexit, the economy and how this could affect our clients and their interest in Spain.

A wonderful and enriching experience that we are eager to repeat next year. Specially in such a historic (and magical!) place as the Oxford College!!

Antonio Guillén and Claudia Font, Spanish lawyers at Gunnercooke LLP, at the annual Gala at the Oxford College.