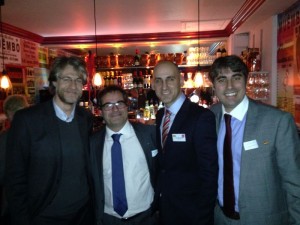 Great event on the 5th March at La Tasca in Leeds organised by a group of businessmen in Leeds, particularly Alejandro Benavente and Blanca Gonzalez who did an excellent job organising this fabuluos event in Leeds where a group of more than 6o attendees networked and gathered to discuss the business possibilities that the North of England, and more importantly Leeds, can offer to Spanish companies or UK companies with an interest in Spain.

Igor Urra, Secretary General of the Spanish Chamber of Commerce in the UK attended the event as well as other business men in the Leeds area and delegates from the Spanish Language Institute (Cervantes) in Leeds.

The Honorary Consul for Liverpool, Enrique Sanchez, also attended the event showing his interest in an initiative that can easily expand to other cities in the North.

See below detailed coverage of the event by the online newspaper El Northern. Please note that the article is in Spanish!

Antonio Guillen is a dual qualified Spanish lawyer and English solicitor at DWF LLP. He is also the Honorary Consul for Spain in Greater Manchester, West Yorkshire and North Yorkshire