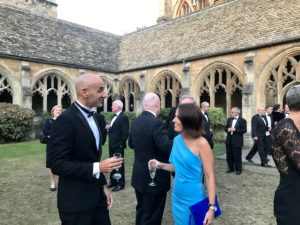 Antonio Guillen attended the annual conference of lawfirm Gunnercooke, where he is a partner, and met his colleagues, including Spanish lawyer Claudia Font, to talk about the progress of the firm as well as other interesting topics such as personal development, stress management and of course…Brexit.

One of the things that Antonio pointed out to his colleagues is the very noticeable increase of enquiries from British citizens with Spanish parents or ancestors who require assistance with applications to become a Spanish national. This is obviously a consequence of the imminence of Brexit and the risk of a no-deal exit from the EU is making many British with Spanish blood consider the possibility of getting a Spanish passport. However, as many of our clients will know, as pointed out in our conversations with them, there are several qualifying factors to become a Spanish citizen and the article below is a good summary of the options available to those considering applying for a Spanish passport:

I have a property in Spain, and I spend my holidays there with my family. Can I apply for Spanish Passport?

NO. Owning property and spending holidays in Spain, even if you have been doing so for a long time, will not allow you to apply for Spanish citizenship.

My partner is Spanish. Can I apply for a Spanish Passport?

I am currently living in Spain. I am retired and moved to Spain some years ago.

There are some exceptions that may allow you to apply before the end of the 10 years period. A Spanish lawyer, or ourselves if you do not have one, should be able to advise whether some of the exceptions to the rule will apply to your case.

My parents are/were Spanish but I am British and I don’t have Spanish Passport. Can I apply for it?

If your father is/was Spanish you could be considered Spanish by origin, although you might have lost your nationality, therefore, you will need to apply for the recovery of your Spanish nationality.

If you are the child of a Spanish mother and you were born before October 1978, you can opt for Spanish nationality.

Please note that every case should be studied and considered separately as the facts may vary the type of application.

At present, current laws in the UK allow British citizens to be British and to have a passport of certain countries. Dual citizenship is therefore allowed in the UK in certain cases, such as with Spain. However, the United Kingdom and Spain do not have a dual citizenship agreement, and Spain may ask you to renounce to your British nationality when making the application. This does not mean necessarily that you will lose your British citizenship, so we strongly recommend contacting a Spanish lawyer for further advise on the implications.

How should I proceed if I am entitled to apply for Spanish citizenship?

You can check the legal requirements to apply for Spanish nationality on the Spanish Government website (www.mjusticia.gob.es) or contact the Spanish Embassy or Consulates in the UK (www.exteriores.gob.es). Doing the process yourself is free so you only will need to pay some taxes and stamp duty. Alternatively, the Spanish Desk at Gunnercooke  can assist with the process and make it hassle-free for you.