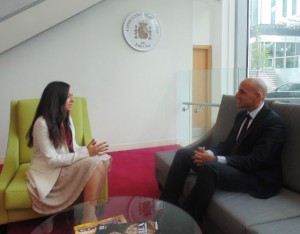 The Honorary Consul of Spain in Manchester is Mr. Antonio Guillen and his office is situated in the law firm gunnercooke LLP on the following address 53 King Street, Manchester, M2 4LQ.

The Honorary Consul is not a Consul General and therefore he acts with powers delegated from the consulate from which he depends, in this case the Consulate General of Spain in Edinburgh.

The Honorary Consul can do the following:

–       Assist in the issue of passports for newborns

–       Assist with the NIE numbers for British

The Honorary Consul is not able to do the following:

–       Register Spanish nationals in the census

Due to the number of calls and to the fact that it is an Honorary Consulate without staff that can be in charge of the phone, please contact us ideally by email.

From 2014, it is compulsory for both parents to be present for the issue or renewal of a passport.